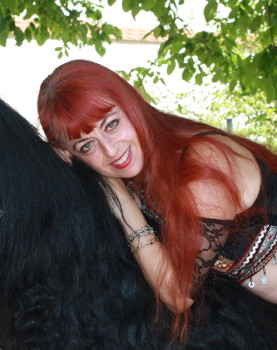 Born in Germany by a Greek mother and with an Australian father of Irish/Scottish origin, I was brought up in Geneva, lived 2 years in Spain (Santiago de Compostella) and 13 years in Denmark (Copenhagen), and since 2012 I live in Germany (Neu-Ulm in Bavaria).

Self-taught Artist-Painter / Illustrator, I have been fascinated by the fantastic and the imaginary since childhood.

Whether in painting or for illustrations, my art is figurative, inspired by mythical characters (Greek mythology), fairy tales and various legends (I especially love fairies, princesses, mermaids, witches, vampires and other little monsters) on a background of nature (flora and fauna).  I also love very much humoristic drawings.

I have done various illustrations for : books, clothing and children’s games ; and also for sf-horror-fantasy magazines and books, publicity, greeting cards, etc.

… And I love drawing for all ages.

I have done several exhibitions, but lately I have done much less since I am now devoting the largest part of my time to illustration (and to the world of book and magazine publishing).

In the Heroic-Fantasy style, my favourites are : G.BROM, F.FRAZETTA, L. ROYO, Jim FITZPATRICK and Victoria FRANCES.

In another category I also love very much : S. BOTICELLI, LAUTREC or the Australian Norman LINDSAY or again Ph. NOYER.

I also admire many illustrators of comic strips ! ;o)

In addition to the painting, in my moments of leisure, I also do:

·      Design and sewing of decorative flower-shaped cushions, with beaded stamen.

·      Embroidery and pearl decoration on clothing

·      Give drawing lessons to adults and children

·      15-17 November 1994 collective exhibition on the occasion of the 10 years of the Hellenic Association of Geneva in the SALLE POLYVALENTE DES CHARMETTES (GENEVA/CAROUGE).

·      November 1996 (November 14 to 21) collective exhibition on the occasion of the cultural week "From Ancient to Modern " organised by the town of and the and History of Geneva as well as by the Hellenic Association of Geneva, in the VILLA DUTOIT (PETIT-SACONNEX/GENEVA).

·      August 2006 – June 2007 collective exhibition with "Skolekunstforeningen Midt-Vest" in several schools in the mid-west of Denmark.